Hello everybody! As you can see, we skipped the updates for January and February, while, as anticipated, we worked on the backgrounds and walls for the dungeons, and the remaining story illustrations.

We’re happy to tell you that all of them are now done and gone!

As it happened, in January, Marco created a totally new ambientation, that we add to ‘The Ruin’, a place that will hold an estimated 2 – 3 hours sidequest.

It’s a special place, and one for which Florian is creating new challenges right now, among which, a puzzle with tower defense mechanics, that we’ll get to test, in their early form tomorrow already!

As the settings graphics are completed, Marco has moved to the NPCs and monsters; beside the demo ones, (rats and undeads that you should be familiar with, by now), the list of them accounts for more than 30 different opponents, with about 10 frames of animation each.

Half of them, roughly, are humanoids, of the various tribes that live in the desert that is Aeon of Sands, while the rest is, well, other stuff 🙂

In the last days of December, we started working with a talented musician and great friend, Gabriele Artuso, who is creating the theme for the game, and many great tracks besides.

We are saving a special blog post for his contribution, let us just say here that to use live recorded traditional instruments as base for the game soundtrack is both a challenge and exhilarating!

Ideally before the end of April, but realistically on the next three months, we plan to work on the following tasks:

After that, only dungeon creation, gameplay finetuning, test and marketing until the end!

So stay with us, and remember to follow us on your social site of preference, Twitter, Facebook or Google+, to get the snippets from the development as fresh as they come, and help us spread the word! 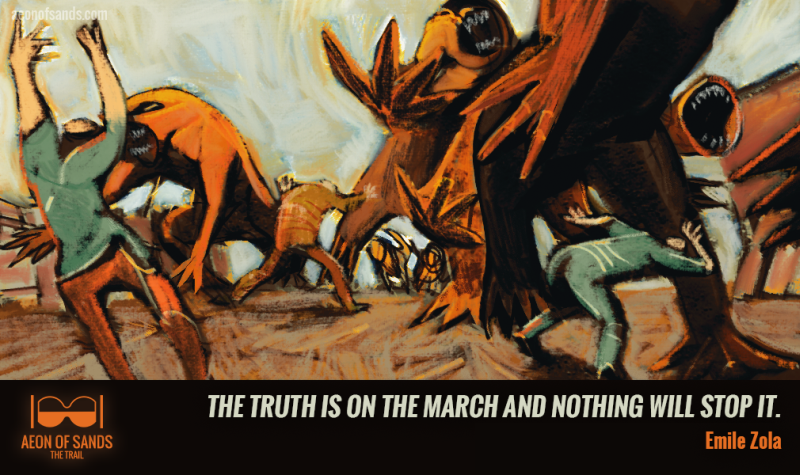 In my dreams, I flee.

Since I was a kid, I run during the night, so much that is it any wonder that I don’t want to do anything during the day?

One time, it’s a creature half man, half bull, running on the walls with an axe; a few times it’s the guards, or the force of gravity, then it’s spies, a tiny spider, chinchillas…

Last night it was epic: a lost civilization, moving labyrinths, dark abyss, yellow train stations in the summer sun in the ’70s, and Lovecraftian cultists, who glue on my teeth a sticky slime to have a magical second sight.

Anyway, the recurring element of these dreams is that sooner or later during the flight, I step through a non-existant forest along the railroad in my backyards, each time feeling the thrill of the as-fast-as-possible getaway from home, and my pleasure at my escape route of choice, which I’m sure my pursuers will fathom just too late. And so I run along the railroad trail, from my town to the next, and then I wonder where to go, like I’m not knowing any place after that, or I’m struggling too hard to imagine things, I’m at a loss.

In short, it doesn’t matter: it only matters that I know these woods at night, that they don’t exist but that I love them, and that I run, and how magnificent is that thrill!
How beautiful that flight, crazy, terrified, forgetful of all ties, traitor of all pacts, mindful only of my salvation.

In my dreams, I embrace my secret call to cowardice.

The above, in a nutshell is Setrani: his motivations, what he cares for, his character.
Law abiding to a fault during the day, he looks with hostility on the hostile environment outside his shell, a self-content bother-me-not city clerk, forced, as the game starts, out in the desert, to face a challenge from which he cannot escape.

While the above is about Setrani’s character, Setrani’s behaviour, instead, is something about you, the game player: will he stick to his basic impulse to self-preservation at all costs, or will he weigh in the greater good into his decisions? Will he not take sides except his own, or not even that, or, rather, try to look past sides entirely? That’s your call!

The general story will happen or not, regardless of Setrani’s choices and behaviour: he is only a character in a larger play.
However, the choices available to him (that is, you) will affect the point of view on that story, the experience of that play, as well as how some events will turn out.

Today I want to describe to you how we combine pixelart with modern shader technology to change scene ambience.

All games use either OpenGL or Direct3D and these APIs are clearly made for 3D. 2D is only a complicated abstraction and reduction of these APIs.

That’s why in my opinion all current video games are 3D games and can use shaders.

There are 3 types of shaders:

Most 2D games only use pixel shaders, because the vertices or geometry is fixed to stick onto the pixel grid. When 2D games use pixel shaders, they only try to change the material (color) of their sprites. When speaking of changing the color of a pixel I not only mean red, blue and green, but also the whole ambience of a scene.

Color Grading is a technique used in movies for changing the ambience of scenes. It’s mostly used for changing Brightness, Saturation or Contrast. But you can also change the curves of bright and dark areas and do selective changes to colors.

In Aeon of Sands we use color grading to change the ambience of the game in certain scenes or situations like day, night, combat or with spell effects.

Here you can see how a scene can change its mood from day to sunset to night.

To use color grading in video games, you need a color grading shader and a so called LUT table (3D color lookup table). In the pictures above, the only thing we have changed was background and the lut table.

and a modified one.

If you want to try color-grading for yourself, read the following references:
http://udn.epicgames.com/Three/ColorGrading.html
http://kpulv.com/359/Dev_Log__Color_Grading_Shader/

Christmas under the Kinami tree 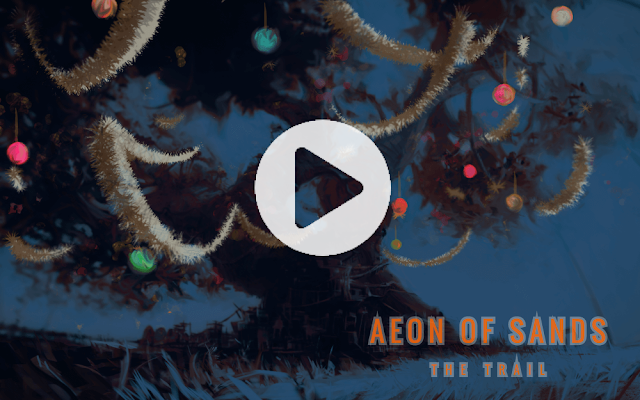 It’s time to get into the Christmas spirit! Do you want to find out how we celebrate the season under the Kinami tree? Then head over to our blog and start playing! We created a little game to help you kill the time until 2016.

Hi everybody! In the last few weeks we have been really busy, so we would like to use this post to draw you a rough map of the here and now of the ’Aeon of Sands – The Trail’ development.

By now, we have completed about 75 per cent of the graphics for the background and objects. On that regard, we have now about one third of the game world designed, with four dungeons completely playable – with monsters, items and everything.

For the next two to three months, we plan to work on the following tasks:

After that, Marco will draw and complete the NPCs and monsters, while Florian will populate the dungeons with enemies, putting the world of Aeon together. We will talk about the various areas in different posts.

Fun fact: While we knew we would cherish the illustration time, we have also recently discovered how much fun it is to create audio effects by recording and editing the sound of kitchen tools.

So you see, we’re currently on full production, also getting valuable help from two talented external artists for additional animations. We’re pretty much able to keep on schedule, even though we have not yet a defined release date.

We will keep you posted! Have a good time, and thanks for reading!