What is it like to play Aeon of Sands?

“Here, have some of my water – says the man under the cowl – you clearly have not packed enough to get here.” Setrani has no strength to object, and, from his curled position, half buried in the sand, accepts the water skin with a hoarse groan. “Easy, easy… Careful not to drop it!” Setrani […]

IRN : HOW LONG HAS THE DEVELOPMENT TAKEN SO FAR? Starting in 2012, about 2 years of research, planning, story and pipeline (how to get the exact old-school look and feel), followed by 3 years of implementation (code, graphics, gameplay, story, audio), and almost 1 year of beta-testing and polishing. ANY IDEA OF A RELEASE […] 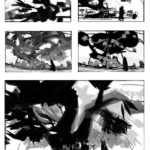 Hello readers! For this installment of “Sleep ’till late with Marco”, I’ll guide you in the process of Aeon of Sands – The Trail official videogame desktop wallpaper creation. The first requirement to create artwork is someone who asks or forces you to do it. Usually a perverted creature called co-worker who ignores the fact that you […]