If you just found about this blog, you might want to check out the website of our soon to be released game too: Aeon of Sands (AoS from now on).

I actually got to almost complete an introduction post here, full of (arguably) interesting stuff on the reasons behind the whole design of AoS, but it got (not really) accidentally deleted in the name of cosmic balance.

But just let’s agree that if there were, you would have for sure read them voraciously, printed multiple copies of them, and shared them with random strangers on your way to the groceries. That’s how much you would have liked them. Blame Karma.

NPCs and opponents creation of the world of AEON

Take a look at the image at the top of this post. Today we discuss NPCs and opponents creation of the pseudo 3D world of AoS. This is a scene you will encounter in the course of the adventure, that depending on your choices, can take you to drastically different consequences. On some of these paths, you will then be able – or forced – to explore the surrounding area by yourself, and probably encounter desert nomads such as those in the scene above.

Nomads are a heterogeneous group of people, anarchic to an outsider’s eye, rigidly structured when you get to live the guts of a nomad caravan. So, I’ll let you in a secret, they do have roles and functions, jobs that define them and their stations: curiously they are not the bunch of illiterate crap-throwing sandworm lovers that you would not invite in the shade of your tree, like, ever.

In any case, among them, one of such functions is the camp guard.
Job description lists a bulky constitution, above the norm aim in throwing crap, a stern visage to discourage tourists.
These guys, standing under the suns more than a healthy time, don their rebreather masks most of the day and nights, and never leave their makeshift hovels without their mantles. Around here, they take seriously the concept of moisturized skin.

So with this in mind, I sketch a bit, coming out with these.

Of those, given time, maybe four whole NPC animation would happen, but considering each takes roughly one week, I would be happy with two. As game encounters, their most important purposes are to be interesting and effective. 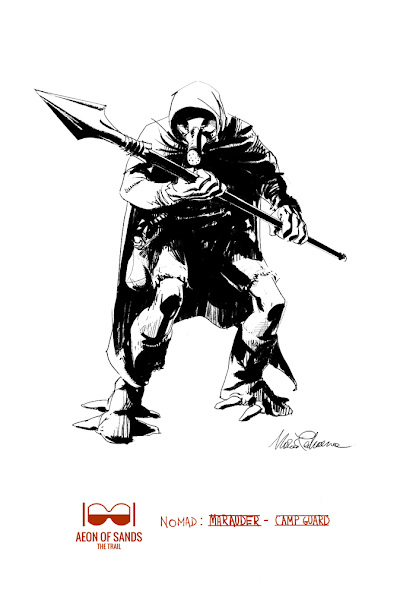 That approved by Florian, I started drawing the different in-game positions.

Our NPCs have ten frames of animation each, two simulating walking for each side; the two that show the NPC turned towards the player are also recycled as in-place movement for when the character is standing facing the party, like moving one’s weight from one leg to the other. Plus two frames for the attack, one preparing it, one having it resolved.

Full disclosure here: I’m no pixel artist. Let me rephrase: I’m not a pixel artist at all.
I cannot do an in-game 1:1 animation or character design. The closest thing to that I do here is creating the explorable environments: walls, floors etc; that’s 1:1 – as it doesn’t require any resizing work – but it’s still drawing freely.

So to do this part of the job, the first step is to draw each position as I would draw a figure illustration, starting from its skeleton, making that coherent with its other frames, place all the ten of them on the same imaginary floor, and of course perspective and dimensions. All of this, I do at a resolution roughly 4 times the one the final character will end up with.

Second step is to actually draw our character, from tattered cowl to fancy designer boots. This is line art only, I need it to know what’s what, with some exactness.

The next step is more pleasant to do to me, as I can loose a bit, and sculpt a bit the figure, shade it, and it’s also the last fun I’ll have for a while, as what comes afterward is all about carefulness.

At this point, a close review of the work done is needed, because afterward I will reduce the whole animation to the size we would use in the game, so there would be no back step possible if something was amiss, if not really a painful one.

To reduce the image, no available resize algorithm is any good, because of artifaction or information loss; I have to use layers with the different products of such algorithms, sometimes posterize them, and adjust some part manually: sadly for me, here pixel art comes in the process.

Then it’s time to color! Here I apply the color with the character separated from the rest of the game, to all frames, obviously using the same palette. When that’s done, I import one of them on its intended background and modify its color via correction layers, if possible, or noting what I have to change in the coloration itself. I go back to my animation and apply the modifications.

Now, there’s a problem to solve, caused by the reduction and coloring: each frame will most assuredly have unpleasant aliasing. So, using a contrasting colored background, I manually cut away the unneeded contour, or I add it where I need it. 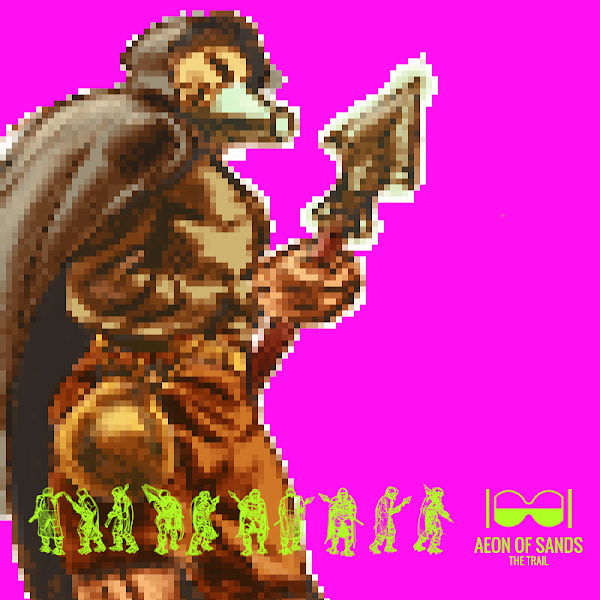 Last step! I simply have to import each of the frames in my huge wallset file. 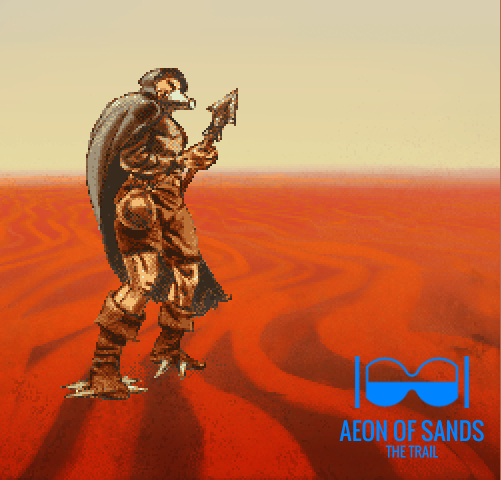 Only remains to fix the NPC shadowing on the floor, rinse and repeat for all NPC and opponents in the game…

Thank you for reading, even more so if you are still here reading this!

See you next time for more tidbits of our creative process!