The Desert and You 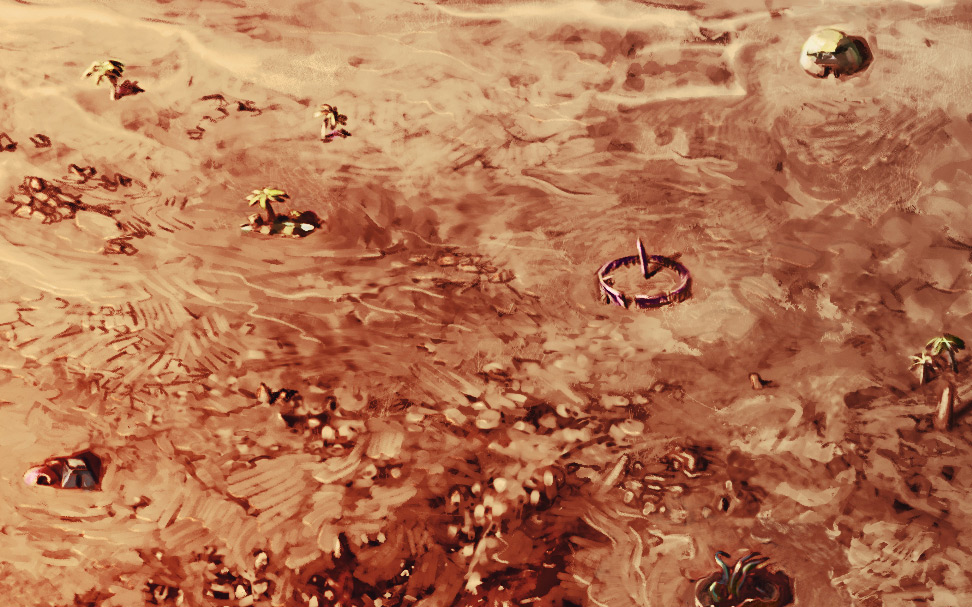 On the proper ways to address strangers in the desert.

One would assume that there were none, as in a desert, there should be nobody to address. But if you find yourself there, a desert ceases to be deserted, and it unmistakably follows that there should be an etiquette and a protocol to addressing strangers. Because everything goes so much smoother when you have protocols, right?

That is at least what Setrani, the main character in the story of “Aeon of Sands – the trail” told himself when was ushered out of town and faced the desert for the first time.

Barely before he thought “Let me back in!” and at the same time of “There must be some kind of error!”

There was also the conflicting thought: “No please, I don’t want to die!”; but his habit of trying to be inconspicuous, which he acquired early in his life, won that friendly bid.

Whether the concept of less resistance path would serve him during the course of our story, that’s a matter for another day, but it will serve me now to describe the (probably not) happy encounters a traveler might have in this (really not) merry land.

So welcome to “Strangers in the Distance and You”. 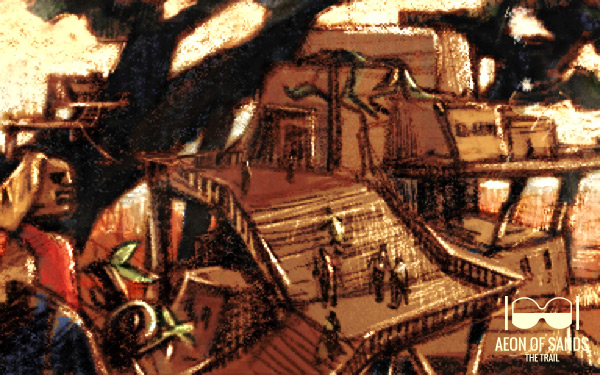 You come from a domed city, a society clustered on the colossal body and limbs of a tree, all covered by a glass dome, sheltering people and vegetation from the brunt of the suns and the cruelty of the winds. You know that there are other cities like yours, by hearsay: you’ve never been to one and you personally know noone who has.

But even if they exist, your city is probably in a state of war with them too, as it is with the desert.

So, even if the chance is very little, those strangers you see there in the distance could be from another city, they could be every little bit as scared of the blinding emptiness around them as you are. Would they set aside their inbred hostility to foreigners, because of this common trait you have? You would, right?

Well… Not easily anyway. Maybe you should listen to your empty belly, though, and let it dictate a protocol to barter some food, while letting them know you still are better than them. Is there a protocol for that?

Of course, they seem to be traveling in a group, while you are alone. However, your moral superiority must surely be evident, even to them!

But now that you are getting closer, you are not so sure that you should think of them as other citizens at all. Those bright colors and… plumes of some bird? They don’t look like proper and respectable townsfolk of a foreign, detested city at all.

Maybe… Are they nomads instead?

Could they be the bandits roaming freely through the desert, in slow migrations? Those who, from time to time, get closer to your town, in raiding parties, attacking the less guarded entrance, robbing what they can in the hovels and plazas nearest to it, taking things and people alike, scavenging for food and for slaves, before making a run for the sands?

Could those approaching be men so unafraid of this terrifying waste, that no badge of honor, true or made up, could sway them from the intention to kill you, capture you and eat you alive, and probably all of the three at the same time?

If they are nomads, you surely better start running. Not that you could outrun a bolt of lighting or the sand storms that a nomad warlock commands. But let’s just hope they have no warlock. 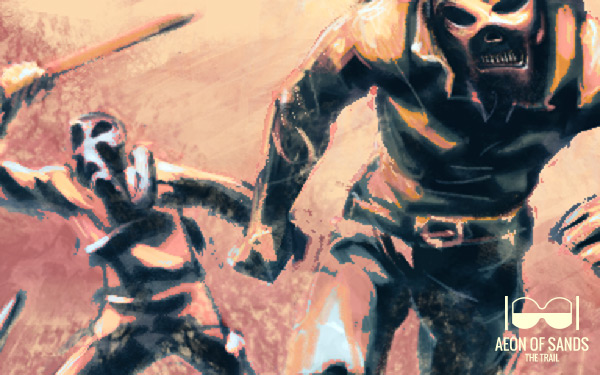 Ahhh… you are raving. It’s probably the heat. You are not used to its full violence.

In fact, let’s not be too hasty: the strangers don’t seem to quicken their pace. Actually, it seems like the distance between you and them has not decreased.

Is that possible at all? This damn creamy hot haze… Making it difficult to judge distances and appearances.

Your stomach closes further. What if they aren’t men at all?

What if they are some creatures just human looking, but not human at all? A bug, walking upright, a sand threader, something you have not seen before! Not that you have seen anything non human before, except the rotten and dried husks of some small animal sold at the markets in town, from the grim and outlandish people who dare travel the surroundings of their city, trapping, hunting.

But you never doubted that they existed, alive and skittering in the deep of the desert.

Therefore, these creatures must be certainly them, running in a frenzy, and getting close to you by the minute!

No… No. Bind your imagination! They cannot be that. Bugs exist. You could even encounter them if you are unlucky, but for sure they are not so calm and upright. All of this doubting is making you sick and feverish. “C’mon then! Come show me what you are made of, you will not have an easy feast of me!”

But then you are ashamed of your sudden outburst. They are still far, but not out of ear! All movement has stopped. They seem frozen in the haze. Precious sweat falls on your eyes and quickly evaporates.

What if they are the worst possible thing imaginable,

something of magic and of savagery that you have no name for, not one that you would chance to utter.

Magic. You have magic, everybody has it, it’s common where you come from. It’s natural in this wrecked nature. The only thing that can keep what human life there is on the land.

Sure, your people work with their hands, they tend sheltered farms and manufacture the tools they use. They build their homes, they suspend the bridges between the limbs of the sacred Kinami tree. But to keep the tree alive, to bend its wood and the glass blown in the furnaces to create the dome that guards you… Magic! A natural magic. 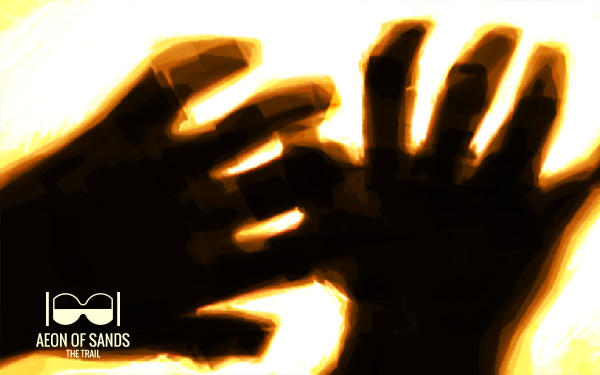 But there is a different magic. One so perverted and dangerous that any practitioner would be killed on sight by anybody, from old man to children, in town and outside…

You never saw it, but you heard from one who knew, that a traveler once told him, to have a cousin who was sure to…

What if that ahead is a group of magicians, with their green plumes and brown masks?

What if… What if… You are trembling, feverishly.

That’s it! Surely their magic is already killing you! You try to find your balance, but you cannot but stumble on; wiping your brow from your copious sweat does nothing to help you see. But you are getting closer to them now, they are for sure luring you with a charm! They are getting larger and larger… Monsters! It’s the end! The end…

But the killing blow doesn’t come, as you wait for it, in a fetal position on the floor, eyes shut and covered from the sting of the evil magic.

“What are you waiting for? I will not beg! (Unless… Would I beg… Would it save my life? I’m an important person you know?)”

But still no answer comes, from cruel lips.

Slowly, you remove one hand from your eyes, and then the other, extending your arms slowly in the space between you and the unknown, your eyes still closed.

You touch a leg. Whoever he is, he’s toying with you. This is undignified!

Shaking, you inhale a lungful of hot air, so that you can face death at least a bit more calmly.

Then you open your eyes, to see the rarest creatures on the land. The brown mask stands there. Scaly and covered with green plumes.

You are looking at the green and brown face of a palm tree. 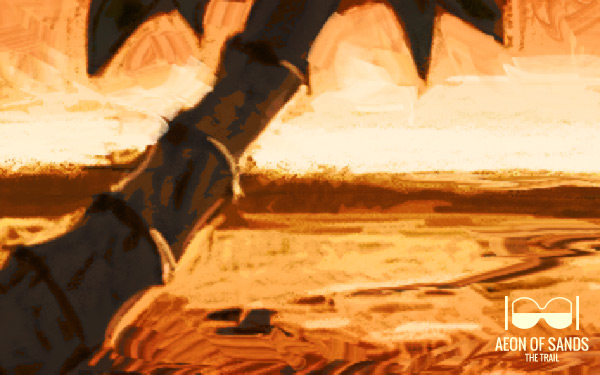 2 thoughts on “The Desert and You”